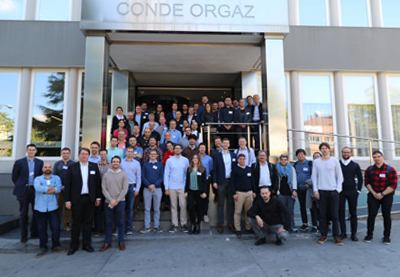 The SCOTT project consortium met in Madrid, Spain from the 21st to the 23rd of October 2019 for the face-to-face and general assembly meetings with CISTER/ISEP represented by Ramiro Robles. This is the last meeting before the final closing event of the project. The final objectives and activities of the project have been agreed among all partners of the different use cases and building blocks of the project.

Also in the beggining of October, the second year review meeting of the project SCOTT took place in the city of Brussels, Belgium. The preliminary feedback from the reviewers was very positive, pointing towards a very successful final report expected in one or two months.
CISTER/ISEP plays a crucial role in SCOTT as chair of the technical board meeting, where the main strategic visions and objectives of the project are discussed. CISTER/ISEP is also leader of the reference architecture of the project, and contributor in the aeronautics domain and standardisation workpackage.
SCOTT is one of the major European projects on security, privacy, and safety of the Internet of Things with a strong industrial orientation in 5 domains and 17 industrial use cases.